I completed a trade this past week with a guy I met at the last card show named Scott.  We have been talking ever since the show about working out a deal.  He is a big Red Sox fan, so I went through my stuff and found some cards I thought he would like.  Here are some highlights of the package he sent my way: 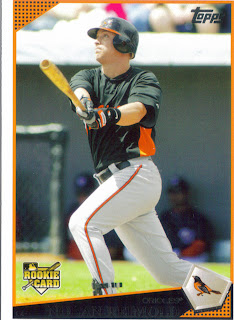 I already had this 2009 Topps Nolan Reimold RC, but when I saw that he had it and would give it up for some Red Sox base card, I went ahead and claimed it.  You can't go wrong with Reimold for me, since he is one of my favorite current players. 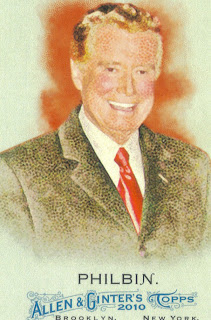 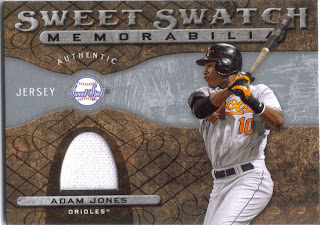 He included this sweet Adam Jones relic from Upper Deck Sweet Spot.  I think of all of the Upper Deck products, I miss Sweet Spot the most. 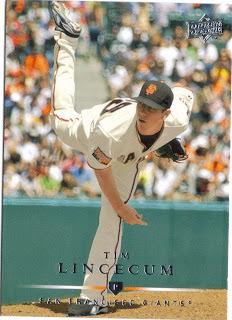 Scott figured out pretty quickly that the best way to impress me, is to do something nice for my son.  He included a couple Tim Lincecum cards for Chris' collection.  I have to check, but I'm pretty sure that Chris didn't have either card.  He was really happy to get a couple cards in the mail. 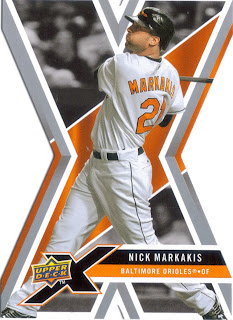 Finally, here is this die cut Nick Markakis from Upper Deck X.  I think Upper Deck missed the mark on this set; it kind of looked like, at the time, that it was rushed.  Of course, a lot of what Upper Deck did in those final years was questionable, but this is actually a very sharp looking card.

I'm really glad Scott and I were able to come together on a trade.  I actually have 2 more trades in the works.  I mailed off packages yesterday to Dodgerbobble and Eutaw Street Cardboard, so I'm hoping I have some stuff to post (along with some hopeful TTM requests) this coming week leading up to Fan Fest.

Thanks for the Trade Scott!  I hope we can come together on another trade really soon!