I came home from work today and the first thing my son told me was "You've got a surprise Daddy, you got something in the mail!"  He made me close my eyes as I came in the house, when I opened them, there was one of my mailers on my desk.  Inside my mailer was a ball that I had sent off on November 28, 2011 to Hall of Famer Steve Carlton. 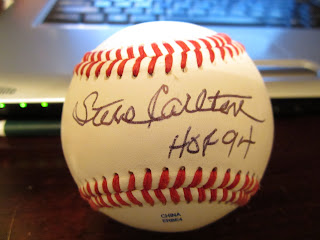 I was beginning to worry about my ball, as I had sent it along with a check.  The check was cashed on December 8, 2011, so I guess Carlton was holding the stuff and signing all of his requests at once.  No big deal, as I now have my 63rd Hall of Famer and my 45th TTM success!

Carlton signs baseballs for a fee of $35.00 made payable to 'The Grace Fund,' which is Carlton's charity.  So, the autograph fee goes to a worthy cause!

Carlton was elected to the Hall of Fame in 1994 (his first ballot) when he was named on 95.6% of the ballots cast.
Posted by William Regenthal at 6:49 PM

That is one awesome success man! Looks like it was certainly worth the price!

All your worrying was for nothing. I'm glad you got it!