I am just about ready to wrap up my Orioles Fan Fest posts and thought I would now take the time to talk about another signed ball I picked up, that of former Negro Leaguer - Jim Bland. 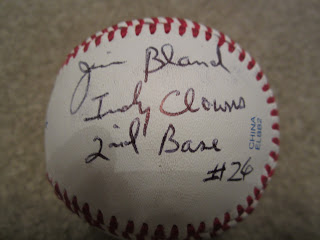 I have been unable to dig up much information on Mr. Bland.  The Indianapolis Clowns continued to barnstorm long after the final Negro League season of 1951.  They later became known as more of a novelty or comedy act, kind of like Baseball's version of the Harlem Globetrotters.  The Clowns were the team that Hank Aaron played for before he was picked up by the Braves. 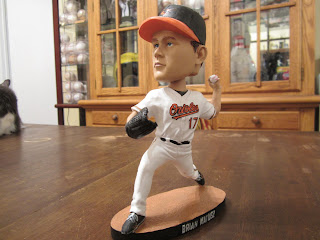 One of the really cool features of Fan Fest was the Giveaways room.  You can go through a line there and pick up some leftover promotional items from past seasons.  When we got through the line, they were giving away Brian Matusz bobbleheads.  Chris, Ryan and I each picked up one.  My bobblehead collection has really grown over the last 2 weeks.  Good thing I have a nice place to put them!

Well, that just about wraps her up.  I had a really great time at Fan Fest and it was something nice that my son and I could do together.  I hope to make it an annual tradition with him... that is until he discovers girls and then his dad will become less cool... Until then, I think we are going to try to get back there each year!

Thanks for reading all of my posts.  I will start catching up on mail and trades tomorrow!
Posted by William Regenthal at 5:25 PM