After our meeting with Mrs. Reimold, Ryan, Chris and I wandered around Fan Fest for a while until the next autograph session that we had passes for - the 3:20 session.  Ryan and I were set to go to different stations, so Chris and I had to wait in line without someone to chat with.

Meeting Palmer was one of my primary goals on this trip, so I was really excited about this station. 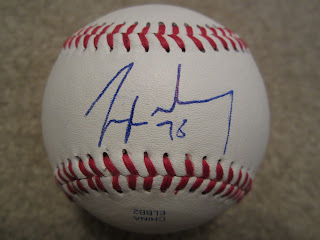 I got a baseball signed by Oliver Drake, but I traded it to him for  the above ball signed by Joe Mahoney.  I met Mahoney in 2010 at a Bowie game.  He had stitches in his lip and when I asked him where they came from, he toldme he got them from sliding hard into a second baseman while trying to break up a double play.  True definition of a 'gamer.'  Mahoney is one of the Orioles' few position prospects in the upper levels of the minors.  I think he has a good chance of being called up to the majors this season. 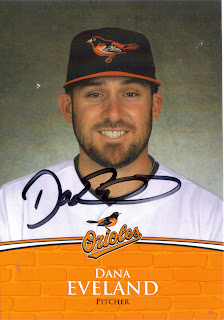 We got this signed post card from one of the newest Orioles, Dana Eveland.  He seemed like a really nice guy.  He took the time to compliment me on my replica 1938 Orioles jersey.  He said it looked awesome but probably wouldn't be much fun to play in.  Seeing as it is a wool jersey, he is right. 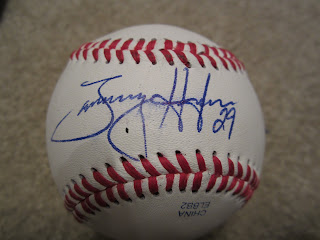 I was also glad to meet Orioles pitcher Tommy Hunter at this station.  He seems like a pretty colorful character, especially since he made sure everyone knew that he had just created a Twitter account (@TommyGoesBoom).  When I got to him, I told him the he should follow me (@FoulbuntWilliam).  I'm still waiting on him to follow me. 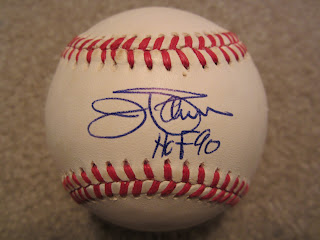 Finally, I got the chance to meet Hall of Famer Jim Palmer.  I had him sign my Bobby Brown OAL baseball that I picked up for $10 at a recent card show.  Definitely a good player to get on this ball.  I wanted to say a few words to Palmer, but he and Tommy Hunter were bantering back and forth.  That was a lot more entertaining than anything I could have squeaked out.  Seeing as I was pretty star struck and all...


Jim Palmer is now the third Hall of Famer that I have met in person (the others being Brooks Robinson and Bert Blyleven).  I already had him on a baseball; a gift that my former boss gave me for Christmas way back in 1999.  I will put this one with my other Hall of Famers and the other Palmer ball will be put away for safekeeping.

Stay tuned for my next Orioles Fan Fest post, the final autograph station.
Posted by William Regenthal at 7:21 PM

You did real well. I love the Palmer auto!

What kind of baseballs do you use for autographs?

I LOVE Jim Palmer's autograph. It's one of the sweeter ones available today.

Quick Question: Where Bundy or Machado at Fan Fest?

Neither Machado nor Bundy were there, P.A.