I was sad the other day to hear that the Orioles sent former first round draft pick Brandon Snyder to the Rangers for cash considerations.

Snyder had played at every stop in the Orioles developmental system and played pretty well until he got to AAA Norfolk.  He got called up to the majors for cups of coffee in 2010 and 2011. 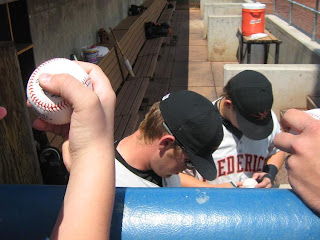 I first met Brandon Snyder in April 2008 when the Frederick Keys visited the former Ernie Shore Field in Winston-Salem, NC.  I took my son, mom, brother, sister and 2 of my nieces to the game.  As my brother Andy and I were getting baseballs signed by Snyder, he mentioned that Matt Wieters was sitting on the other end of the dugout.  I replied "MATT WIETERS????" and he replied, "Yes, THE Matt Wieters.  Would you like for him to sign your ball, too?"  Of course we did, so Brandon called Wieters over and got our baseballs signed.  As they were signing, my son Christopher (who was 2 at the time) was crying, so Brandon reached into his bat bag and pulled out a game used baseball.  He said "Here, maybe this will make the little guy feel better, no wait, hold on..." He signed the ball and then handed it to Wieters to sign, then said, "Here you go."  Chris still has that ball on his shelf in his room. 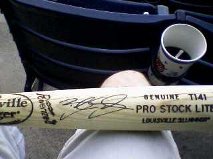 I met Brandon Snyder again in June 2010 when I visited Norfolk for a Tides game.  Brandon was signing autographs when I asked him if he would sign my bat.  He said "Of course" and signed it in black sharpie.  As he was signing it, I thanked him for being so nice to us when we met him in Winston-Salem and it meant a lot that he took the time to try to console my crying baby, when a lot of people would be annoyed.  He looked up from signing the bat, shook my hand and thanked me.

As a baseball fan, when you get the opportunity to meet some of the players and especially if they are friendly, you really hope they succeed.  I really hate to see Brandon move on to another organization, but since he is going to the reigning 2-time AL Champions, I think this is a good thing for him.  I really hope that the change in scenery does him good and he tears it up at Spring Training.

Brandon, if you ever see this blog, good luck to you and I wish only the best for you; a very friendly and classy ballplayer.  Thank you again for taking the time out to sign autographs for fans of all ages.

Posted by William Regenthal at 6:15 PM

If I'm lucky enough to get him to sign something, I'm going to mention this story.