We immediately went from our previous autograph station to our next one, the 4:40 meeting with Robert Andino, Nick Markakis and Brady Anderson after hitting the restroom and meeting up with Ryan, of course.  Ryan was in this line with us, so it made the wait so much more enjoyable having someone to chat with. 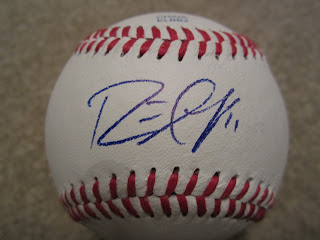 The first player in line was Robert Andino.  I have gained so much respect for Andino following this season, firstly because he was always so awesome whenever I met him (this was the third time I have met him in person) and he is always really nice to my son.  He signed the above baseball for me and the below post card for Chris. 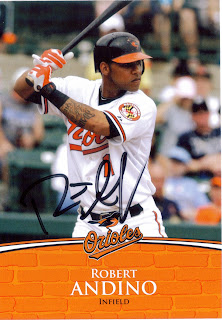 Chris slapped five with Andino, knocking his hand onto the table.  Ryan and I both told Chris "Don't HURT him!"  Andino laughed and signed our stuff. 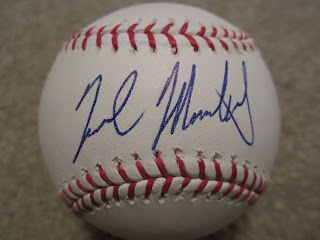 After Andino was a current Oriole whose autograph I have been coveting for a long time, Nick Markakis.  I got Markakis to sign an OMLB ball (Selig) on the sweet spot.  I have several of the Orioles' First Round Draft Picks: Roberts (supplemental round), Markakis, Brandon Snyder, Billy Rowell (should have been Tim Lincecum), Matt Wieters, Brian Matusz, Matt Hobgood and Manny Machado. 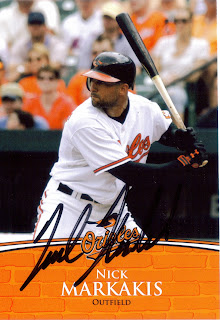 Nick was really quiet, but he did say hello to Chris.  He had abdominal surgery a couple weeks ago, so I'm sure he is still recovering from that. 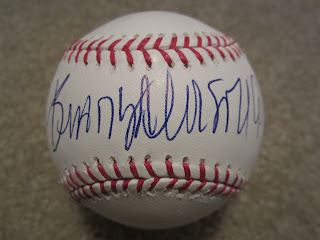 As much as I would love to say that Markakis was the highlight of this session, the reason I paid $40 for the voucher (they were all sold out, so I had to buy one off of Ebay) was so I could meet one of my childhood favorites, Brady Anderson.  I had Brady sign another OMLB (Selig) ball that I picked up before the show. 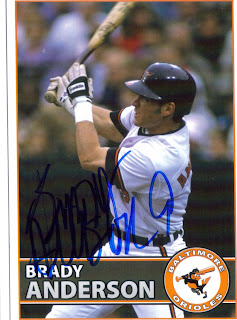 Brady also signed this post card for Chris.  Brady is remembered for his improbable run in the 1996 season where he hit 50 home runs.  Everyone is entitled to their own opinions on how Brady achieved that number, especially since he didn't get close to 50 before or after that season.  Your opinion is fine, but in my mind, I point to Roger Maris (39 homers in 1960, 61 homers in 1961 and 33 homers in 1962) and Davey Johnson (43 homers in 1973 and didn't hit more than 18 in any other season) among others...  Sometimes players have a great season.  Let me enjoy it.

This autograph session was definitely worth the $40.00.  I'm really glad I got all of these guys' autographs, for sure.

Stay tuned for my final Fan Fest Post on the miscellaneous stuff we got including a Negro Leaguer's signature and a Brian Matusz Bobblehead...

Posted by William Regenthal at 5:50 PM

I've been comparing my Markakis ball with other signatures I have of his and it seems he never signs exactly the same.

Also, my thoughts on Brady Anderson is that his body size (or head size) never changed like McGwire, Sosa, and Bonds did. I'm not going to call his 1996 campaign a fluke because he was a helluva good ballplayer. I think he could DH this year and be better than Vlad was last year!

Nice stuff man, all of the autographs look great and I'm glad you had a great time! You deserve it!