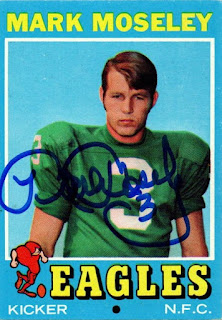 There were a few football players who were free signers at this year's National.  I had a card for one of them; the rest, I had to buy cards.  I ended up finding 4 of the same card for Mark Moseley, that covered the 4 vouchers I ended up with for him.  The cards I found were all his rookie card, 1971 Topps.  The cards turned out great, and I will send off the other 3 in some future care packages.