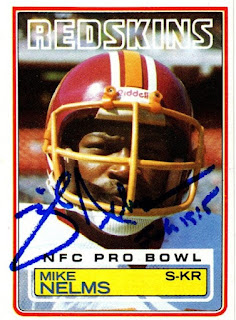 Now that I am breaking down all of the free signers at this year's National, I've realized that there were a lot of signers.  Usually, I skip the non-baseball guys, but I think this year, I got at least one card signed by all of them except for the football guy at the VIP party (I forgot his name already).
There was a vendor right near the bathrooms at the show who had a display board with cards of most of the free signers for $5.00/card.  Some (most) of those were a gross overpay, but in the end, my time was valuable, and it saved me from spending hours at dime boxes looking for random folks.  So, I purchased a few of the guy's cards, like these of Mike Nelms.  The card above is a 1983 Topps. 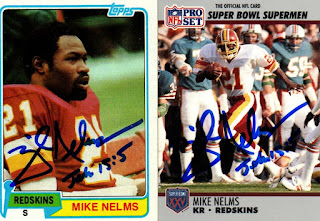 I also found his 1981 Topps and a 1990 ProSet.  All of the cards turned out great and are a little something different in my album.