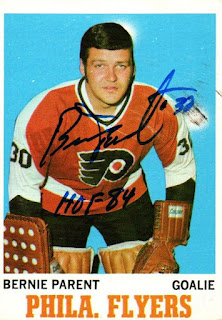 When I saw the list of VIP party signers for the National, I was glad to see that Bernie Parent was one of them.

I had quite a few of his cards that I could use, thanks to the box of vintage hockey cards that my good friend, Max, gave me a few years ago. I had this 1970-71 Topps Hockey card of Parent. It has a little bit of surface damage next to his shoulder, but you can hardly notice it.

Posted by William Regenthal at 7:18 PM