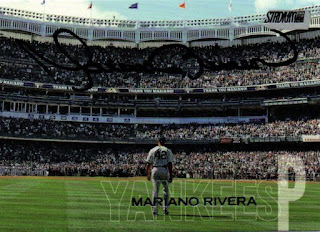 The big name that I signed up to meet at the National this year was former Yankees closer, Mariano Rivera.  I already had him on a ball (thanks to Mom), but I still wanted to meet him.  I remembered that I had this 2018 Topps Stadium Club, so I opted to get it signed and into my album.

The price point is crazy for a card, but I felt like this card was worth it.  This is an amazing shot of Rivera.  The only problem, now, is that he switched pens on me when he was signing and signed it in black Sharpie, even though I told the handler that I wanted blue.  It wasn't worth making a fuss over; the card still looks amazing.