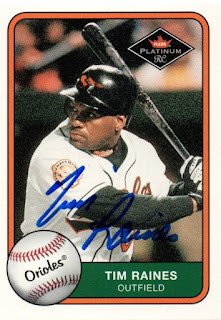 Since there weren't many paid signers that I needed on baseballs or for my 1987 Topps set, I went with getting guys that I may have seen before, but had cards that I really wanted to get signed.  Tim Raines was a player I had gotten before at a National, on a baseball.  I also had already completed his 1987 Topps, so this year, I paid to get him on this 2002 Fleer Platinum RC that is the only cards I have ever seen with Raines in an Orioles uniform.  The card turned out great.

Raines was really nice, and posed for a selfie.  His price was fine, so I was completely ok spending what it took to get this one taken care of. 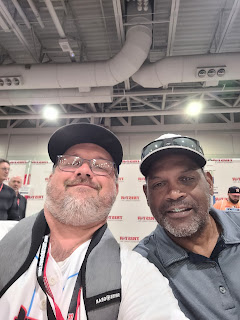 I'm glad Raines was cool.  He thought the card was interesting, since he only played for the Orioles for a week at the end of the season in 2001.  But, the card is there and is signed.

Posted by William Regenthal at 7:57 AM

I didn’t realize that Raines had played for the Orioles.
Good trivia question.
Enjoyed your Posts about the National.