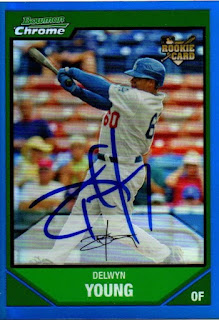 After I got home from the National, I jumped right into graphing at the Wood Ducks, since the Nationals were in town.  I had a ton of their coaches, plus a bunch of their team had cards.  Jeremy De La Rosa and Dustin Saenz had been moved up and Brady House didn't make the trip since he was on the IL, but there were still a ton of guys with cards.
The above 2007 Bowman Chrome blue refractor came from a dine box at the National, so it was nice to get it signed right off the bat.  Young was nice enough, but only signed one per for me.  One of the days we were there, he asked Chris if he could keep his 2009 Upper Deck, which Chris gave him, and oung signed everything he had on his page.  I had a lot of his cards left over, but I was happy with what I got done. 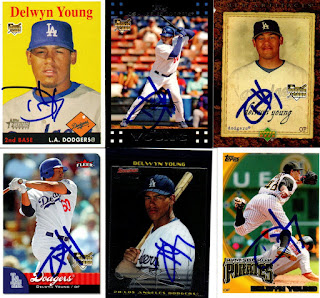 Young has a nice variety of cards, and my good friend, Max, hooked me up with some that I didn't have.  He got a bunch back signed, as well, so we are both happy. 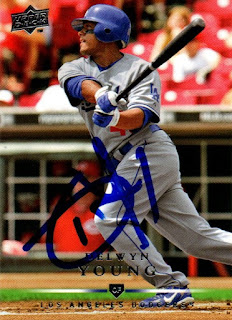 I was glad to get a few of these 2008 Upper Deck cards out of my boxes.  I've got a ton of them, and don't get into that box as much I would like. 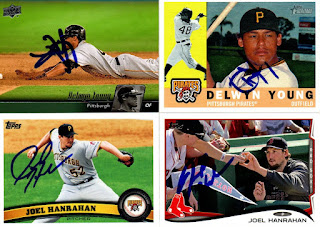 Joel Hanrahan also has a bunch of different cards.  His son was visiting this series, and commented on the 2014 Topps.  So, the next day he came out, I gave him one of them. 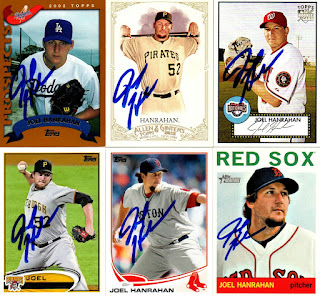 Max and Gerard provided me with a bunch of Hanrahan's cards, so there was a lot to get done.  I finished off his cards, which was nice. 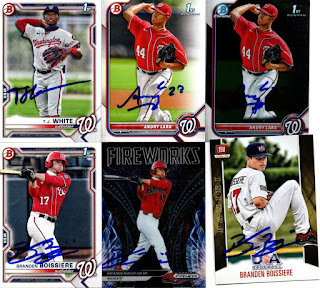 Like I said, a lot of the Fredericksburg players had cards, so I got a bunch of my own stuff, and 50/50s for others taken care of.  All of the players were nice, which helped me knock a bunch of stuff out. 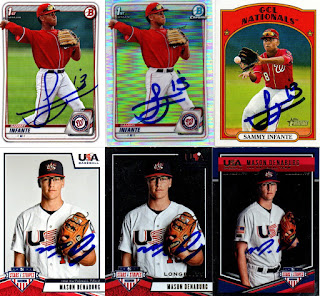 Sammy Infante was really nice.  He asked me immediately when he saw us where were the good places to eat around Kinston.  So, I told him a few places, then the rest of the series, we would talk about where he had eaten prior. 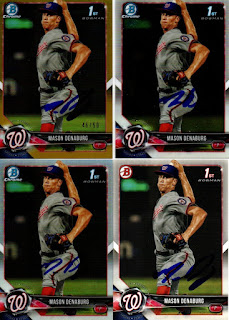 Since Mason Denaberg was injured when Fredericksburg came through last season, I missed out on getting him.  By the time this series came around, I had a ton more of his cards, including the 2018 Bowman Chrome gold refractor that I found at the National. 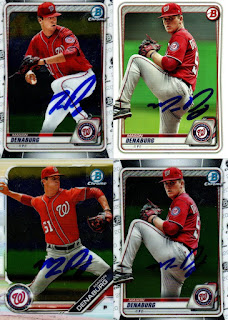 I was so glad I finished off Denaberg.  I made a lot of room in my boxes with his stuff being removed. 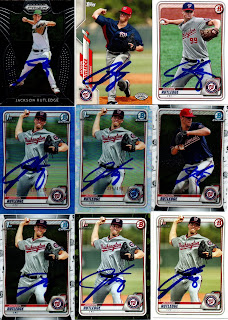 Jackson Rutledge was another player who had a bunch of cards, and he finally came through Kinston.  I also finished off everything I had of him, including a nice 2020 Bowman Chrome blue refractor that I found at this year's National. 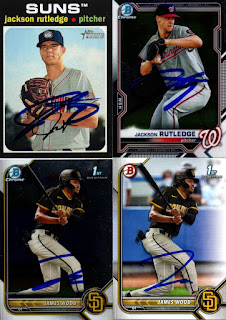 This big news for this series was that James Wood was reporting to Fredericksburg, with the possibility that he would meet up with the team in Kinston.  He got there on Thursday, and is a big boy.  He is 6' 7" and his a ball over the batter's eye i dead center field during batting practice.  He was obtained from the Padres organization in the Juan Soto trade. 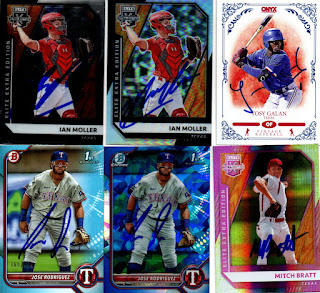 Finally, I got some cards signed for some other folks for the Wood Ducks.  I'm about done taking stuff for the Woodies, but have a hard time telling folks no.  I do like the different parallels. 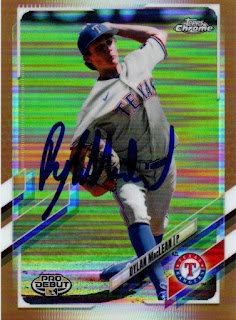