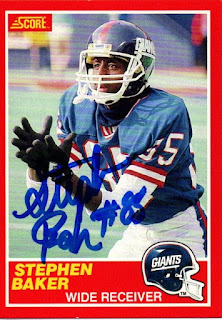 Former Giant, Stephen Baker was one of the free signers at this year's National, and one of the last ones I need to get posted.  I really liked this 1989 Score Football card.  There's always been something I've liked about a red bordered card.  Baker seemed like he was genuinely happy about being at the show, and I was glad that I went through his line.

I have one more of the free signers, then a couple oddball autographs I got while I was at the show.  I will probably start to mix some TTMs back in so I can stay on top of that stack this week before some more come in (unlikely).