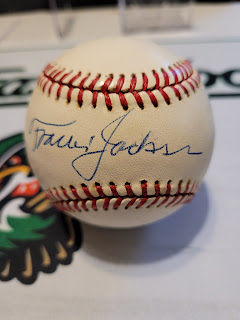 Hall of Famer #165 was added to my collection at the National as part of two big pickups. I had been keeping an eye on Travis Jackson baseballs for a long time and I found this one lower than what I had seen elsewhere. The signature is great, as is the ball.

A quick glance at Jackson's stats definitely make you wonder why he is in the Hall of Fame.  It turns out, he was regarded as the best shortstop of his era.  That makes a lot more sense; his career fielding percentage is .952 and his career defensive WAR 31st all time.  Injuries kept him off of the field for a good chunk of his career, otherwise, his offensive stats may have been higher.

In all, I am very happy that I added this Hall of Famer to my collection, even though no one knows who he is when I talk about him.

Posted by William Regenthal at 10:30 PM