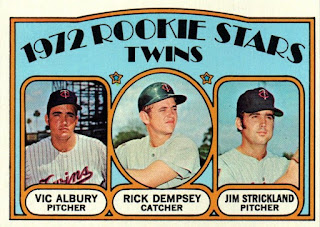 When I got to the National in Atlantic City, this year, I didn't go with a goal to finish my 1972 Topps set.  I went hoping that I could make a dent in it, but by the time the show was over, I had crossed everything off of my 1972 set checklist.

I spent a lot of money on it, since most of what I needed was from the High Number series, or stars.  Still, it feels good to be done with it and potentially move on to another vintage set in time for next year's National.

The last card I needed was the above 1972 Twins Rookie Stars, featuring Rick Dempsey.

Brace yourself for a wave of National posts for a while.

Congrats on the completed set!