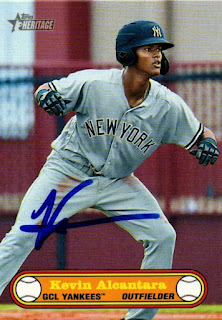 The next-to-last home series for the Wood Ducks has come and gone.  This time around, they went 4-2 against the Myrtle Beach Pelicans.  The Pelicans had several guys with cards on their team.  A few of them were really tough, but I had a little bit of help this week, which knocked out some of what I needed done. 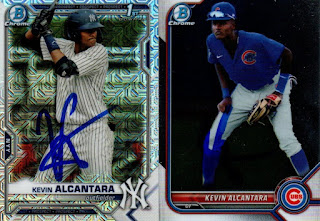 Kevin Alcantara didn't sign Tuesday, but was good for one per the rest of the days.  I really liked the Heritage Minors box topper that I got done a the top of the post.  I also got a 2021 Bowman Chrome mojo and a 2022 Bowman Chrome done. 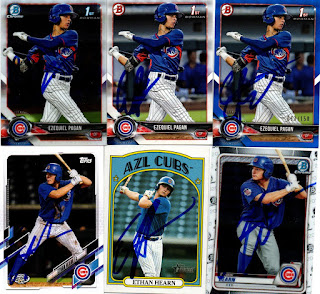 I had Ezequiel Pagan in my box since 2018, and I finally was able to get my cards signed.  Ethan Hearn wasn't too cool on this trip.  I had heard he was pretty nice, but he was pretty cold to a lot of the folks here.  Maybe it is because it is the end of the season.  Still, I got a few of his cards out of the boxes, which was nice. 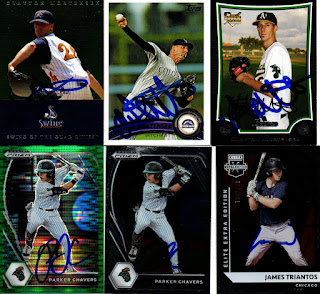 I knocked out some Clayton Mortensen for myself, and my friend, Max.  Parker Chavers was fine, but James Triantos seemed miserable when asked to sign.  I was glad to get my pack pulled 2021 Panini Elite Extra Edition signed by Triantos.  It's easy to buy the cards off of Ebay, but it is a good feeling to get a card you pulled signed in person. 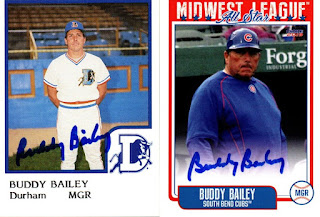 My friend, Jessie, got me the 1986 Durham Bulls Buddy Bailey card.  Bailey commented on it and how he got a call from the guy who wrote Bull Durham to ask him some questions.  I also was glad to get my 2019 Midwest League All Star card signed.  I wish the would have All Star games in the minors again.  Maybe next year. 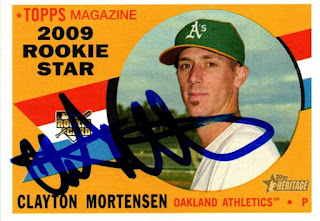 I liked getting this 2009 Topps Heritage signed by Clayton Mortensen.  These are great cards, and look great when signed.  Mortensen was really nice; he signed for us after one of the games.  I almost missed him that game, as we had seen him walking back to the clubhouses as we were leaving the seating area. 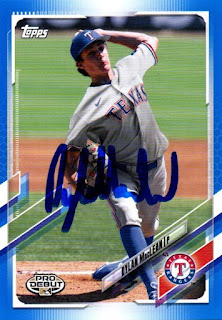 My friend, Gerard, sent me this blue parallel from 2021 Topps Pro Debut of Dylan MacLean.  I have asked a lot of Dylan this season, and he has been really cool.  He's a good kid, and fun to talk to. 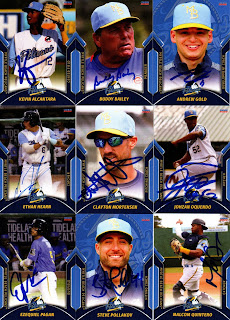 Gerard also sent me a Myrtle Beach team set, and I knocked out a bunch of the guys from the set.  I missed several who have been moved up, but I was pleased with getting the ones I had. 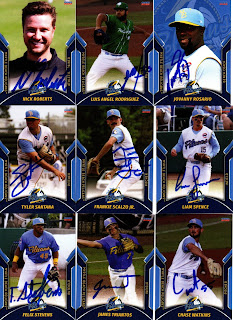 I like the design of Myrtle Beach's set; it isn't the greatest that I have seen, but it is a decent one, for sure. 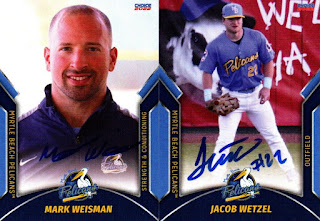 I appreciate Gerard sending me one of the sets.  I usually get a couple team sets of some of the nearby opposing teams, but I didn't do that this season. 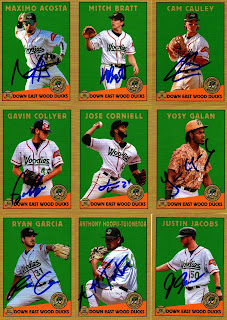 The Wood Ducks team sets also were released prior to this week.  A bunch of the guys have been moved up to Hickory, or down to Arizona.  I got everyone I could get this week, except for the trainer and also the pitching coach, Demetre Kokoris.  I'll see Demetre the next series and get his cards signed. 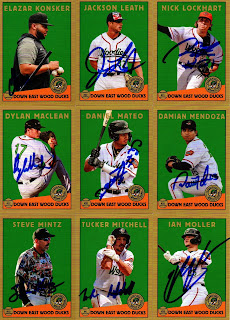 I like this design.  It is different from what they have done in the past.  While I do enjoy the backgrounds of the older team sets, this one has a 1958 Topps feel to it and is very bold.  It looks really cool in my Wood Ducks team set album. 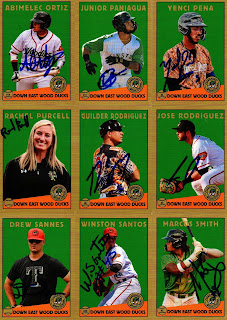 The price point of the set was great, also.  That was mainly because it was released so late in the season.  For 8 bucks, however, I was willing to pay it and just deal with the possibility of going to Hickory to knock some of the guys out. 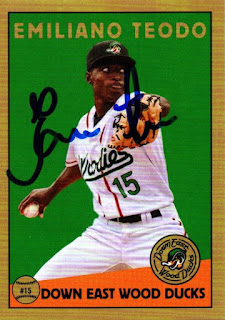