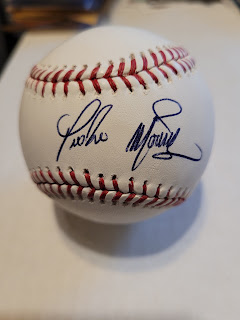 The National always seems to provide me with an opportunity to add a new Hall of Famer to my signed baseball collection. This year, I added three new guys and upgraded two others. The above Pedro Martinez was the first ball that I pulled the trigger on, and it is beautiful.

Very cool! Real jealous you get to do this!