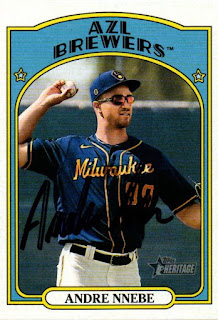 Here is a former Carolina Mudcat that I saw this past season, but was unable to have sign anything.  Andre Nnebe didn't have any cards until 2021 Topps Heritage Minors came out after the minor league season was over.  I saw that he signed TTM, so I ended up getting one of my cards signed that way, instead.

Nnebe (b. 1997) was a 28th round pick in the 2019 June Amateur Draft out of Santa Clara University by the Brewers.  He has played two seasons in the minors in the Brewers system.  He has 84 hits, 10 home runs and a .241 batting average.  The Brewers allowed him to play in the Independent Leagues during the 2020 COVID season, which was pretty smart.  It kept him active, however, he did struggle with Carolina this past season.  He may stay back at Low A to start the 2022 season.

Posted by William Regenthal at 9:37 PM