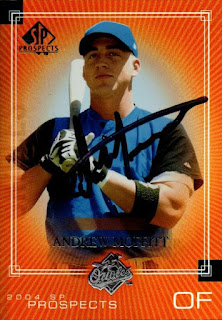 My big box of Orioles cards that my buddy Max sent me yielded another obscure player to try to sent to TTM.  Andrew Moffitt had only one logged attempt at TTM on the SCN database, and it was someone to sent to the Bluefield Orioles in 2005.  I took a shot, using the nice address lookup website I've found, and tried Moffitt myself.  Luckily, I was correct with the address I found and got this nice 2004 Upper Deck SP Prospects card signed.

Posted by William Regenthal at 10:32 AM