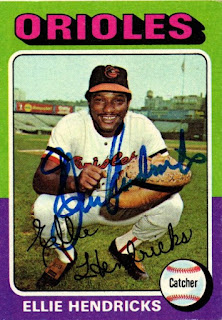 Elrod Hendricks was a coach with the Orioles when I met him back in 2005.  I got him to signed a cheap baseball, which has since faded to oblivion.  I wish I knew then what I know now, because I would have come off the money for better baseballs.  So, when I saw this 1975 Topps signed by Hendricks, I added him to my autograph album.  He was nice to us when we met him, but he did admonish the group of us for going crazy when Don Mattingly, then a Yankees coach, walked by.  Again, if I knew then what I know now, I would have dropped an 87 Topps on Mattingly to sign.  He didn't stop, though, so it probably didn't matter.

Hendricks (b. 1940 - d. 2005) died only a few months after I met him.  He had been in the Orioles organization for a very long time as a player and coach.  He played in the majors from 1968 to 1979 for the Orioles, Cubs and Yankees.  He had 415 hits, 62 home runs and a .220 batting average.  He won the World Series with the Orioles in 1970.  Hendricks died of a heart attack in 2005, just one day short of his 65th birthday.  He had been reassigned in the Orioles organization following that season, after serving 28 years as the Orioles bullpen coach.  He had a mild stroke in April of that year, which led to him being reassigned.

Posted by William Regenthal at 11:32 AM