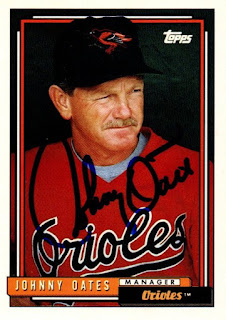 The next signed card I found at the National was this 1992 Topps signed by former Orioles manager, Johnny Oates.  I knew how tough finding Oates's autograph is, so I picked it up from the same vendor where I found my Cal, Sr. autographed card.

Fun fact, one of my son's elementary school gym teachers was the widow of one of Oates's coaches (Greg Biagini).