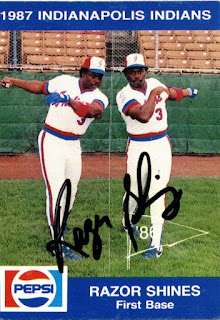 Not all of the signed cards I bought from this vendor at the National were deceased.  I picked up this Razor Shines card because of his name, and because I've wanted to get one of his signed cards in my album for a while.  This 1987 Indianapolis Indians card is pretty cool, and also features the old 80s Pepsi logo.

I thought Shines had more of a career than that, but I probably was only focusing on the front of the cards of his and not the back.

Posted by William Regenthal at 5:13 PM