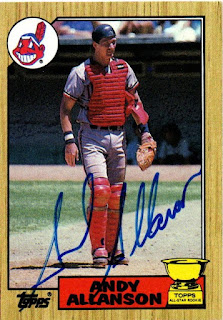 Apparently, Andy Allanson doesn't sign TTM.  I've checked.  So, when I finally saw a signed 87 pop up for sale in one of the Facebook groups I'm in, I grabbed it.  I was confident that the card was legit, because the person selling it is a fellow builder of the signed set.  He wanted to upgrade this card due to a small blemish on the back, and I took it for my set.

I picked the card up for $50.00, which seems high, but since Allanson signatures are hard to get, I went with it.

Posted by William Regenthal at 6:04 PM