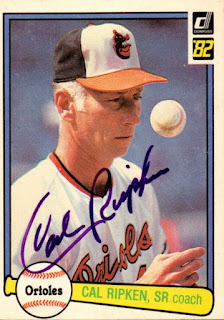 When I went to the National this past year, I stopped by a vendor who had boxes of signed cards that they had gotten TTM or IP.  They had several deceased players at some really good prices, so I picked up a decent amount of cards.  I intended to post them after the National, but I was so far behind with TTM and IP graphing posts, I put them in a drawer and forgot about them.  Going through the cards now, it is kind of an embarrassment of riches, because of all of the cool cards I forgot I had.  These definitely need to get into the autograph album, so I will start with one of the cooler cards I picked up, this signed 1982 Donruss Cal Ripken, Sr.

I have seen Sr's autograph plenty of times, so I know this one is legit.  I immediately put it aside once I saw it in the vendor's box, because I knew, if nothing else, this one was going home with me.

Posted by William Regenthal at 7:20 PM