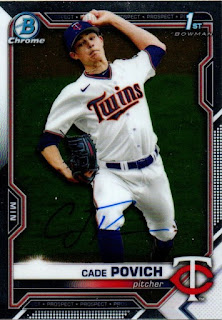 Another 2021 Bowman TTM success came in over the last few weeks; this one was from Twins prospect, Cade Povich.  He signed the cards in a really thin blue marker, but they look really nice. 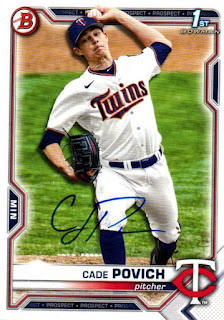 I mailed to Povich on January 7 and got the cards back on January 18, for an 11-day TAT.

Hey William just came across your site as I was searching for Cade's address. I didn't see it on sports cards forum and I'm a twins fan who just pulled his 1st Bowman chrome. Any assistance would be appreciated. Awesome blog by the way!

Happy to help; shoot me an email and I'll assist. Hope you see this, because blogger doesn't have a "reply" funtion.

Thanks so much! Just gave you a follow request on Instagram. Don't see your email on you blog anywhere.

Found it! I'll shoot you over an email tomorrow. Thanks again.