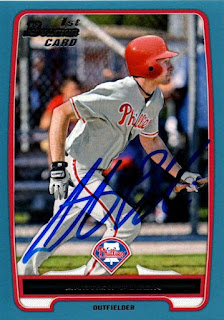 Here is a random 2012 Bowman card that I found in one of my boxes, which I was able to have signed TTM.  This is a blue parallel Andrew Pullin numbered 282/500.  I was able to find an address for him and send it off.