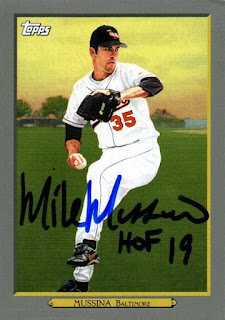 Right before the holidays, I sent off a batch of TTMs to wrap up the year.  One of the requests was a repeat to Hall of Famer, Mike Mussina.  I had several cards of his sitting aside waiting to be sent out, and I had a little bit of money available to pay his fees.  So, I took the four cards that I most wanted to get back and sent them out.  The above 2020 Topps Turkey Red turned out so well.  This card is super sharp; I am glad I chose it to send out.  It was my 4th choice to send, but might look the best of all of these.

Here are the other three cards that I sent.  The one on the left is a 1999 Fleer Ex clear acetate card that looks amazing.  In the middle is a 1997 Flair Showcase and the one on the right is a 2000 Pacific Invincible.  All of the cards I chose turned out great.  I have several more that I probably will send sometime later on.  I have to recover from the holiday spending and some of the private signings that I have taken part in.