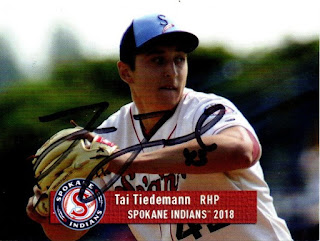 While looking for addresses for players in 2021 Bowman Draft, I discovered that one of the players I was looking for had a brother who had been in the Rangers organization.  So, once I found the address (for Ricky Tiedemann), I pulled my Tai Tiedemann cards that I had stockpiled while hoping he would move up to the Wood Ducks. 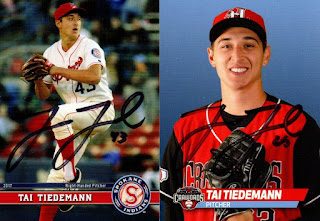 Tiedemann (b. 1996) was an 8th round pick by the Rangers in the 2016 June Amateur Draft out of Long Beach City College in California.  He played in the Rangers system from 2016 to 2021, reaching AA (and bypassing the Wood Ducks completely, since the minors were restructured last season.  He has a 16-12 record with 208 strike outs and a 3.94 ERA.

I mailed to Tiedemann on January 10 and got the cards back on January 19, for a 9-day TAT.