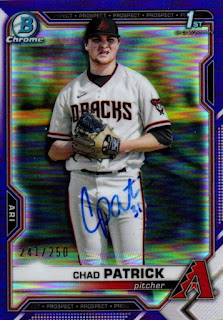 A nice wave of 2021 Bowman Draft TTMs has begun to come through.  That makes checking the mail fun again.  I have sent off a ton of TTM requests already this month, after sending only sporadically to end 2021.  This success came from Chad Patrick after I had to change the address I wrote on the envelope, after I had already mailed the cards. 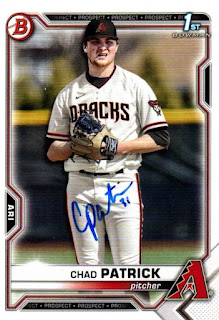 The folks at my post office know me well enough where after one of my friends told me I had sent to the wrong address, I was able to ask before the envelope left the building, and they allowed me to dig through the bin and find my envelope.  Apparently, my friend is friends with Patrick, so he told him that my cards were on the way, and he graciously signed for me.  The purple chrome parallel I showed is numbered 241/250.