Another TTM Success From Whitey Herzog 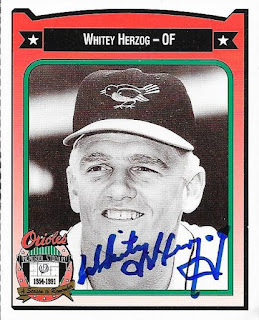 I thought I was done sending cards to Whitey Herzog TTM, but I had completely forgotten he had been an Oriole, and he turned up in the 1991 Crown Orioles set.  I am not working on this set, but I am trying to get some of the cards signed.  Mostly, guys that are notable and also some of the older former players who may not have many cards to begin with. 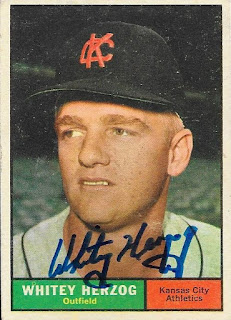 The 1991 Crown was a big reason I sent to Herzog again, but I also had gotten this awesome 1961 Topps from my friend, Neil, around Christmas time, and I had also wanted to get it in my autograph album.  This card looks great, and I am glad I sent it along. 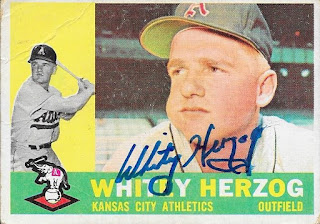 Finally, I had this 1960 Topps in my vintage box, and figured that since I was sending the other two cards, why not find another $5 and send this one, as well.

So, for a fee of $5/card, I sent these three off to Herzog and they all look great.