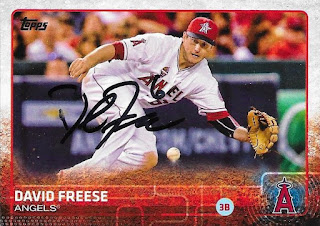 Sometimes, the reason I send out a TTM request, it is because I really want a certain card in my autograph album. When I saw that David Freese was signing, one particular card came to mind that I wanted to send. The above 2015 Topps is part of the dumbest short print idea I've ever seen, the "sparkle" short prints. If you look closely at the ball, it has a sparkle on it. Yeah, those parallels were hard as crap to identify, and I imagine a bunch of them are sitting in bulk boxes at shows, never to see the light of day again. Did I say that I hated that idea?

I had that card in my card show box for a long time, but no one ever was interested in it. Who knew? So, I pulled it from the box and got it signed instead. 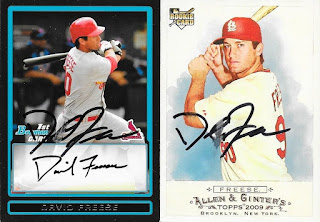 I also added Freese's 2009 Bowman and 2009 Ginter to the request and both of those came out nicely, as well.