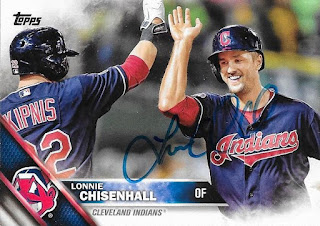 I had sent to him once before, but I guess those cards are long gone.  I finally was successful in getting a TTM return from Lonnie Chisenhall.

I had watched Chisenhall while he was with the Kinston Indians years ago, but never did get his autograph.  I finally was able to do it when he started signing from his home.  I had him sign a 2010 Pro Debut Tools of the Trade (bottom left), 2014 Topps Gold (bottom middle), 2015 Bowman (bottom right) and a 2016 Topps (top).

Chisenhall (b. 1988) was a first round pick by the Indians out of Pitt Community College here in Winterville (applause!!) in the 2008 June Amateur Draft.  He was the 29th overall pick that year.  He played in the majors from 2011 to 2018 for the Indians.  He played last season for the Pirates AAA team, the Indianapolis Indians.  His Major League totals include 578 hits, 64 home runs and a .268 batting average.

I mailed to Chisenhall on April 10 and got the cards back on May 4, for a 24-day TAT.
Posted by William Regenthal at 6:38 PM