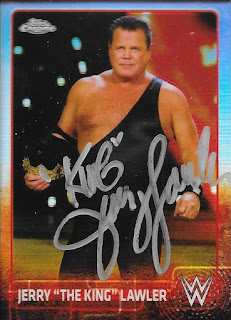 Chris and I went through his box of wrestling cards so he could send a few things out.  He had several duplicates, so we sent them out to see what we could get back and split the autos.  One of those subjects was Jerry "The King" Lawler.

The King is a WWE Hall of Famer and wrestling legend.  For the last 20+ years, he has done commentary on WWE programming, but before that, he was a Memphis wrestling legend.  Lawler wrestled in numerous promotions (usually local wrestling groups) and has held more recognized titles than any wrestler in history, even though he has never held a title while with WWE.

Lawler (b. 1949) has wrestled professionally since 1970.  He suffered a heart attack on air during WWE programming in 2012 and later had a stroke (in 2018).  He has continued to wrestle and provide commentary periodically since then.