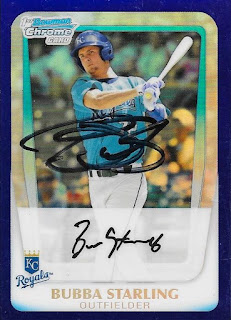 I bought the 2020 Harvey address book a month or so ago, and it really has paid some dividends.  I have sent off a bunch of TTM requests based on addresses that I found in the book, and have started to see some returns.  One such return was from Bubba Starling.  Once a top prospect in the Royals system, Starling finally broke into the majors, and has been signing TTM.  The above 2011 Bowman Chrome came from a friend of mine, Matt, who sent it to me a long time ago.  He and I recently reconnected, got to talking about the card, and I saw that I could get it signed.  So, with Matt's blessing, I sent it on. 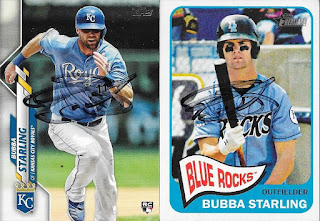 I also sent a 2020 Topps and a 2014 Topps Heritage Minors.  Starling's Sharpie started to fail when he signed these cards, but I'm still happy that I was able to get him.

I mailed to Starling on April 27 and got the cards back on May 4, for a 7-day TAT.  He was my first success from the Harvey book.
Posted by William Regenthal at 5:54 PM