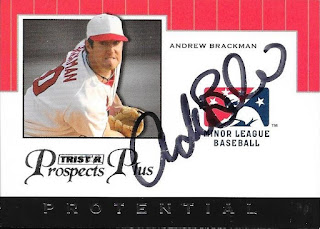 I got a few more cards out of my old rookies box when I got these three cards signed by Andrew Brackman. 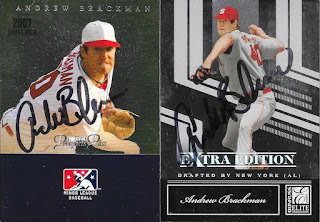 I had busted quite a few packs of Tristar Prospects Plus and Donruss Elite Extra Edition back when I was helping at the local card shop. I'm glad I was able to put some of those cards to use.

Brackman (b. 1985) was a former first round pick by the Yankees in the 2007 June Amateor Draft. The former NC State University star played in the majors in 2011 for the Yankees. His MLB career consisted of 3 games with no earned runs, no strike outs and no wins or losses to speak of.

Nice. That's a name you don't see too often anymore. My wife's cousin lives in North Carolina and a few years ago, she sent over an autographed baseball. Said that the guy was signing at her work but she couldn't remember her name. Took me forever to track down who the signature belonged to. Have a great weekend.