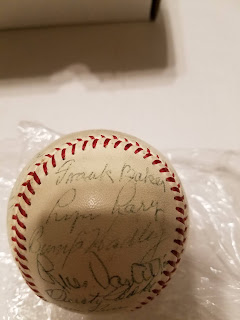 My mom has been working hard on crossing some tough names off of my Hall of Famer list.  She found this Yankees legends signed baseball and handed it to me this past week while I was vacationing back home.  I had taken the vacation as a mental health break, and ended up riding around with my mom while she ran errands, like old times.

She had told me that my Christmas gift for 2020, 2021 ans 2022 had come in, and she couldn't wait until December to give it to me, so she went ahead and hooked me up while I was in town.  I was surprised that she found a baseball with at least 4 Hall of Famers that I needed (and another Hall of Famer that I already had, but was happy to add again).

One of the Hall of Famers on the baseball is Frank "Home Run" Baker.  His signature is at the top of one of the side panels on the baseball.  From what I was able to gather, this baseball was signed at a Yankees legends or old timers day.  The ball is a very old baseball; it looks like it is a Spalding official baseball.

There are also a bunch of other former Yankees on the ball, and as time allows, I will tackle each one in a separate post.  I can't thank Mom enough for the ball, and the ability to cross off some of these tough players from my list.  So, thank you, Mom!  Here we go with the first player profile:

Baker managed the Easton Farmers of the Eastern Shore League and is credited with discovering Jimmie Foxx.  He was fired as manager upon selling Foxx to the A's because the Farmers believed that Baker didn't get enough money for Foxx.

Baker is my 147th Hall of Famer on a baseball.
Posted by William Regenthal at 9:10 PM

Wow. Mom of the Year candidate.