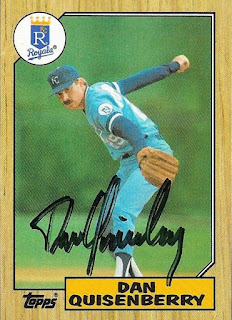 I had been looking for a Dan Quisenberry signed 1987 Topps for a long time, and finally found one for a reasonable price on Ebay.  His Sharpie wasn't too great on this card, but it is signed, and it crosses a tough one off of my list.

He only appeared on one BBWAA Hall of Fame ballot, 1996, where he received only 3.8% of the vote.  I wonder if the writers knew then what they know now, would Quisenberry have gotten a better shake in the voting.

Quisenberry was diagnosed with a highly malignant brain tumor in January 1998 and passed away in September 1998 at the age of 45.
Posted by William Regenthal at 5:19 PM

Can they go back and put him on the ballot again?

Loved watching his delivery. Hopefully he'll be on the Modern Era Committee's list of candidates in 2023.