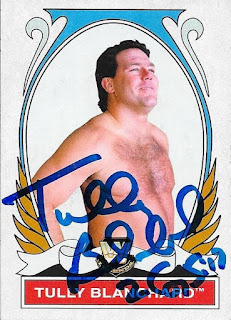 I added another signed wrestling card to my collection with this TTM success from Tully Blanchard.  I remember watching Blanchard on Friday nights at my cousin Lynn's house when I was little.  She would come and pick me up and have me stay the weekend with her.  I always enjoyed watching Mid-Atlantic Championship Wrestling at her house.  That was where I learned about wrestling legends Magnum TA, Blanchard, and the great Ric Flair.

Blanchard (b. 1954) began wrestling professionally 1975.  He wrestled for his father's Southwest Championship Wrestling before joining Jim Crockett Promotions' Mid-Atlantic Championship Wrestling in 1984.  He is most widely known as a member of the Four Horsemen stable of wrestlers alongside Ric Flair, Arn Anderson and Ole Anderson (and other iterations of the Horsemen after Ole Anderson was forced out of the group).  Blanchard held titles such as NWA National Heavyweight Champion, NWA US Heavyweight Champion, NWA World Tag Team Champion and WWF World Tag Team Champion.  He was inducted into the WWE Hall of Fame as a member of the Four Horsemen in 2012.