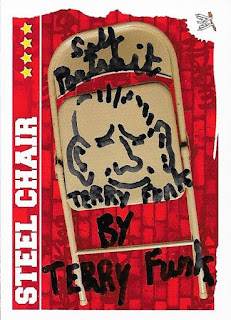 I've gotten thousands of signed cards back from folks over the years, but this might have been one of the coolest returns that I have ever gotten, and it was all because I didn't have any cards of my own for former wrestler, Terry Funk.

Chris had gone through his box of wrestling cards and found a Terry Funk card.  He asked me to check and see if Funk signed TTM.  He did, and I decided that I wanted to send something for myself.  I knew I was going to include a 1987 Topps checklist, since I wanted to get one of those signed by him and into my 87 album.  I also had seen the above "steel chair" card in Chris's box, which he told me that I could have.  So, I included it in the TTM request to Funk (I also put in Chris's original card, which Funk signed and went in Chris's album).

I got the steel chair card back that Funk drew a self portrait on.  It looks really awesome, and I was really amazed that he took the time to draw on my card.  It will look awesome in my album. 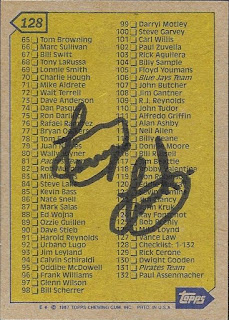 He signed the back of the 87 Topps checklist, which works out, since I can show both the fronts and backs of the checklists in my album.  I've had a couple folks sign some on the front, and a couple sign the backs, so if someone it flipping through my album, they can see what both sides look like inked up.

Funk (b. 1944) began wrestling in 1965 and has wrestled all over the globe in many national wrestling promotions, most notably, WWE, WCW and ECW.  In the latter part of his career, Funk became known for more of a hardcore style of wrestling (the use of weapons, etc, which makes the steel chair card really cool).

Funk won the NWA Heavyweight Championship in 1975 by defeating Jack Brisco and later lost the title to Harley Race.  He wrestled in WWF in the mid-80s, appearing with his brother Dory Funk, Jr. as a tag team at Wrestlemaina 2.

Funk fought in a "King of the Death Match" tournament in Japan in 1995, losing in the finals to an "up and coming" hardcore wrestler named Cactus Jack (more people know him as Mick Foley, or Mankind).

Funk has held numerous wrestling titles and has been inducted into many wrestling halls of fame, including the WWE Hall of Fame in 2009 along with his brother, Dory, Jr.

In 1989, Funk appeared as a bouncer in the movie, Roadhouse, alongside Patrick Swayze.  He also choreographed the street fight scene between Rocky and Tommy Gunn in Rocky V.

That is an awesome card to get back. So nice he spent the time on a self portrait, such a great touch.