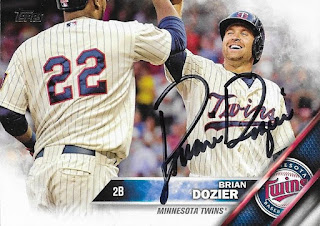 I sent out a ton of TTM requests this winter while I was bored and waiting for Spring Training to start.  Several of them came in, but a bunch are still hanging out there in Limbo.  One of the autographs that surprised me when it came in was this signed 2016 Topps from Brian Dozier.  The card turned out really well.