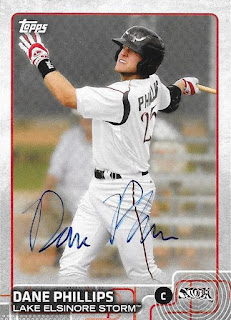 I was able to move some cards out of my stash of older Bowman, Heritage Minors and Pro Debut cards with this TTM success from Dane Phillips.

I really like the 2015 Pro Debut (above) look, but didn't open many of those boxes.  Getting on of the few cards I have signed is an added bonus. 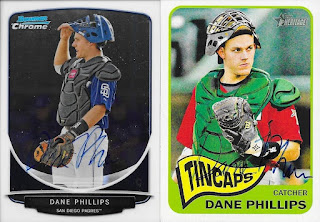 The above 2013 Bowman Chrome (left) came out of my boxes, and the 2014 Heritage Minors came out of a huge box of stuff that my friend, Trevor, gave me.  Now, they will all be in my album!

He played 6 seasons of pro ball between 2012 and 2017; 3 seasons in the minors (Eugene, Lake Elsinore and Fort Wayne) and 3 seasons in independent ball (Evansville).