Another TTM Success From The Original Frank Thomas 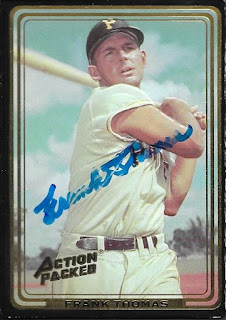 I sent off this 1992 Action Packed card, along with the $5.00 fee to get another Frank Thomas autograph for my collection.  I had mailed to him a few years ago, and in addition to the cards I got signed, I paid for a couple signed photos, as well.  He was surprised at the time that I didn't request the signed photo from when he was part of a 4-home run succession feat accomplished by the Milwaukee Braves in 1961.  I kept meaning to pick it up and kept putting it off. 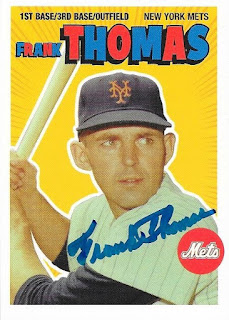 I finally got around to sending to him again, and made sure to let him know that I was including $20.00 for the signed photo.  He included the signed custom card above, and sent the signed photo (below) separately. 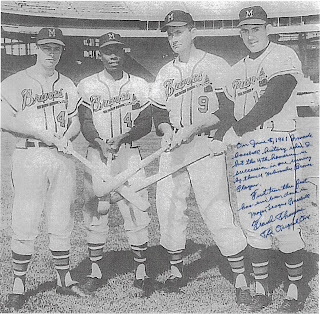 Thomas signed and inscribed the photo as follows:

On June 8, 1961, I made baseball history when I hit the 4th home run in succession in one inning by these 4 Milwaukee Braves players.  First time this feat has ever been done in Major League Baseball.  Frank Thomas The Original One.

I just realized that today is the anniversary of the feat, which occurred 59-years ago today.  Funny how that worked out.  The four players are:  Eddie Mathews, Hank Aaron, Joe Adcock and Frank Thomas. 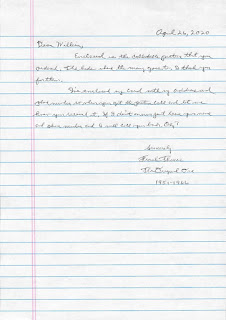 Dear William,
Enclosed is the collectable picture that you ordered.  The kids where the money goes, I thank you for them.  I've enclosed my card with my address and phone number so when you get the picture, call me and let me know you received it.  If I don't answer, just leave your name and phone number and I will call you back, ok?

I did call Thomas, and he picked up.  It was just a brief conversation letting him know the photo came, and that I liked it.  It was very quick and to the point.  Still, he is a really nice guy.