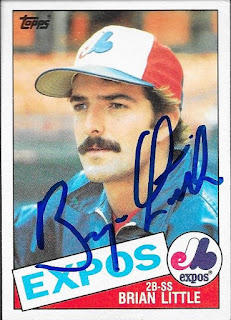 While going through my boxes for the 1,000th time, I pulled out some more cards of guys who I saw that were signing.  I had these two cards of Brian/Bryan Little and sent them off to be signed.  The above 1985 Topps turned out really well. 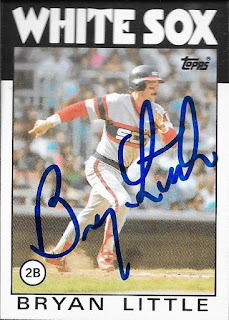 I enjoy the 1986 Topps set, and from what I understand, that set has undergone a bit of a renaissance the last few years.  It seems that folks are seeking out Gem Mint 10 versions of these cards, and they fetch a huge sum.  I remember when I got a couple wax boxes of this product for $5/box about 15 years ago.  Times really have changed.

Little (b. 1959) played in the majors from 1982 to 1986 for the Expos, White Sox and Yankees.  He had 226 hits, 3 home runs and a .245 batting average.  I just noticed that he attended Louisburg College in Louisburg, NC.  In my regular line of work, Louisburg College was a client of ours, which is pretty cool.