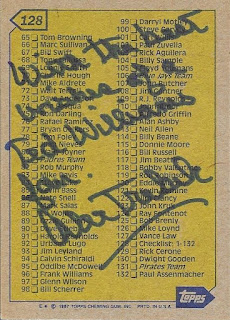 I was able to add another notable figure to my 1987 set when I was able to get Alex Trebek to sign a 1987 Topps checklist.

I had seen that folks were getting his autograph TTM, but I didn't have any Jeopardy! cards, so I figured a 1987 checklist would do just fine.  I even put in my note about not having any Jeopardy! related items, and that led to the cool inscriptions that Trebek wrote for me.  The above card says "With the best wishes of a Ted Williams fan." 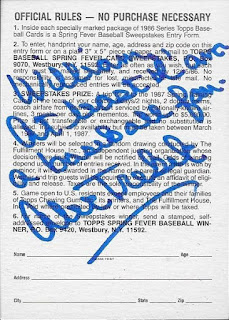 I also sent along an extra 1986 Topps Spring Fever Baseball entry card, and Trebek signed it, too.  This one was inscribed "At least I'm a baseball fan."

I've watched Jeopardy! for years, and was glad to see that Trebek is signing TTM.  He has had health challenges lately, following his diagnosis of Stage IV pancreatic cancer.

I mailed to Trebek on March 7 and got the cards back on April 6, for a 30-day TAT.
Posted by William Regenthal at 8:24 PM

That was very cool of Alex! I wish him well. Now, if we can just stop those Colonial Penn commercials.