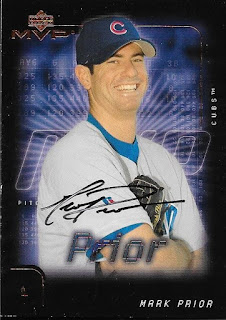 This was a TTM success that I was really excited to get back.  I had waited quite a while, but got a couple signed cards back from Mark Prior.  The above 2002 Upper Deck MVP card was added to my mailer by Prior, himself, which was really awesome.  I like this card's design, and if I were choosing cards to send him, I would have definitely sent this along. 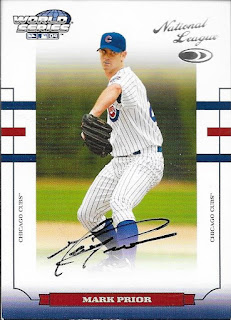 This 2004 Donruss World Series card was the one that I did send him.  It was heavily creased in the mail, so that is why Prior included the other card, I think.  I know nothing about this series; I believe the card came out of a repack box that I picked up somewhere along the way years ago.  It turned out really well, and will be a unique addition to my autograph album.