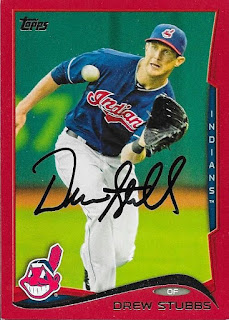 I have spent more and more time trying to identify recent players who sign TTM.  One of them was Drew Stubbs, and I got some nice cards signed by him.  The above 2014 Topps Target red parallel turned out nicely.

I mailed to Stubbs on April 8 and got the cards back on April 16, for an 8-day TAT.
Posted by William Regenthal at 7:29 PM