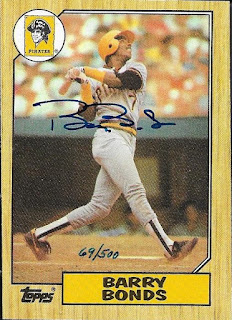 With the National being pushed back and possibly canceled, I took the money I had saved up for my trip and went ahead and paid off my car.  I also got myself a little something, since there aren't too many cards to be had out there.  I picked up this nice addition to my 1987 set, a signed Barry Bonds rookie card.

The card is numbered 69/500; I imagine that is from whatever signing this came from.  It was JSA authenticated, and it now in my album.

He is the face of the Steroid Era in baseball and this will most likely keep him out of the Hall of Fame.  In my opinion, he was a Hall of Famer before he took steroids, and being one of the most well-known baseball players of all-time should punch his ticket, since the Hall is supposed to tell the story of the game, but that isn't for me to decide.  The all-time hits leader isn't in, either.  If Bonds (and Clemens) get in, then I believe Pete Rose, Shoeless Joe and Buck Weaver should be in, too.

Still, though, I am very excited to have been able to add this card to my set.
Posted by William Regenthal at 10:44 PM

Congratulations! I picked up one of these a couple of years ago, because I love the look of the card.