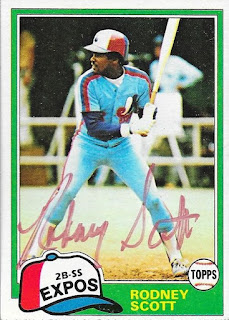 I had ROdney Scott's cards in my box for probably 4 years or more, but always put off mailing to him due to him having signing fees.  I finally had a few extra bucks and decided to send to him, so I could clear out some space in my box. 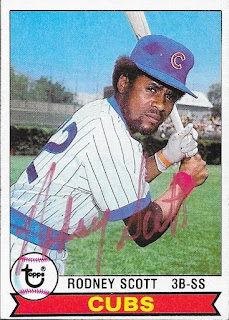 Still, the cards got signed, and they'll add something a little different to my album, which always helps.

I mailed to Scott on April 8 and got the cards back on April 25, for a 17-day TAT.  I paid a fee through PastPros of $17/card.  Had I known that the signatures wouldn't look all that great, I probably would have put it off even longer.  Oh well.
Posted by William Regenthal at 12:00 PM