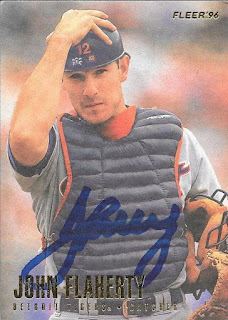 I have been getting a ton of TTM successes from guys who played in the late 1990s.  I think that is just how it has worked out lately, since I have been working on the 1995 Topps set, and I busted a couple boxes with Chris.  The above card of John Flaherty came out of a box of 1996 Fleer that I have been holding onto for about 10 years.  I bought that box and a box of 1994 Upper Deck from a card shop in Gastonia, NC when it was closing.  I figured that Chris and I would have some fun with the boxes a couple weeks ago, so we opened them.  Fleer toyed with the "matte" finish cards for a couple years, citing that they would be better for autographs.  I really like the cards, and yes, they work great for autos.  My only problem with them is that they are a pain to go through quickly, as the rough finish makes the cards stick together some. 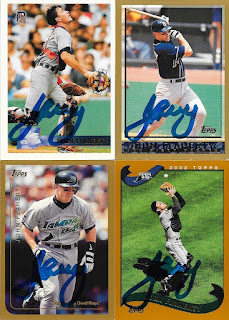 I added four years of Topps with this TTM success, clockwise from top left is 1996, 1998, 2002 and 1999.  I didn't have any 1996 at the time of this success, so knocking this off the list leaves me with only 2008 to add to my Topps Autograph Project.  I have several 2008s out for autos, just none have come back yet.  I'm kind of interested in seeing which is the first to come back.  Speaking of my Topps Autograph Project, I have added the tally to my wishlist spreadsheet, in case anyone wanted to see how many of each Topps year that I have so far.  An interesting note is that 1985 has finally surpassed 1987 as the set I have the most autos on, now. 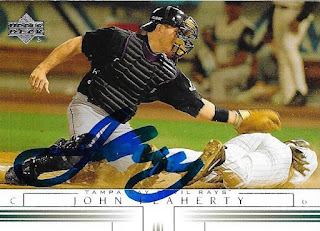