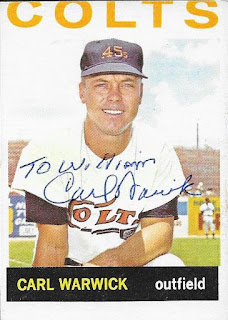 I got a nice TTM success from former Oriole, Carl Warwick after finding his card in my Orioles box and checking to see if he signed TTM.  I was even happier to find that I had one of his 1964 Topps cards in my vintage box, so I was able to get two cards sent off.

I love this 1964 Topps because of the Colt .45s jersey.  I might have to find one of those jerseys at some point.  They look really cool. 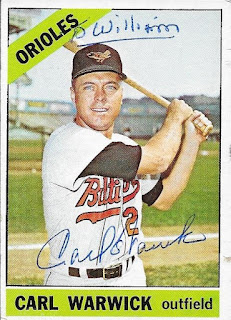 Here is the 1966 Topps that had taken up residence in my Os box.  This card turned out nice, as well.